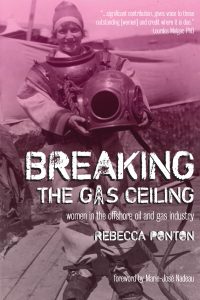 To say Amelia Florence Behrens Musser Furniss led a colorful life would be an understatement.
Born July 6, 1895, just one year before the discovery of Summerland oil field in Santa Barbara County, California, the site of the first offshore discovery in the U.S. from wells drilled from piers that extended out to sea, her father, Captain Henry Behrens of Denmark, ran a commercial diving business before the turn of the 19th century and a diving bell exhibition on the Venice Pier in California, and taught both Amelia and her sister, Dorothy, to dive.

In the Roaring Twenties and the era of the flappers, she was unpredictable, unconventional – and, yes, unflappable – seemingly up for any type of adventure. “The diving girl,” as she was often called, first made it into the newspapers in March 1913 when her marriage at the age of 17 was listed in the Los Angeles Times.

In an October 1921 newspaper article, you can fairly hear the annoyance in the (presumably male) reporter’s voice when he types, “If it isn’t one thing, it’s another with Florence Amelia Behrens Musser, woman diver. Florence Amelia manages to get on the front page of newspapers every few months.” He goes on to write about her latest “exploit” – a dangerous descent into a 162-foot oil well through 24-inch casing to retrieve some tools – as if it were a media stunt. Amelia had been asked – or volunteered, depending on the account – to attempt to retrieve the expensive tools when Captain’s Behrens’ size prevented him from going into the pipe.

A faded tea-colored clipping in Amelia’s scrapbook from the Venice Vanguard Evening Standard takes a different tone, with the front-page announcement of the triumph of the local “deep sea diver [who] has won a new record, unparalleled in the history of diving and underwater exploits.”

Read the FULL excerpt on Ravishly