“I joke that I made either the stupidest or the smartest decision of my life,” Dianna Liu says laughing, “when I left my refinery job.” Liu is president and founder of ARIX Technologies, Inc., described on the company’s website as an early stage, venture backed robotics and data analytics start-up or, as Liu calls the company’s main attraction, “a pipe-crawling robot.”

“I loved working in the refineries, but I wanted to build something that, if it even helped one person, would be the accomplishment of a dream.” 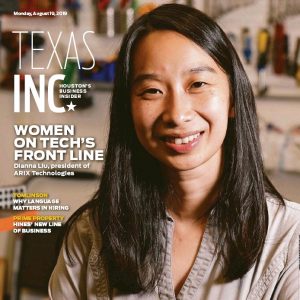 Engineer Dianna Liu is the founder of ARIX Technologies

Before graduating in 2012 with a dual major in mechanical and biomedical engineering from Duke University, Liu interned with a number of impressive companies in the medical field, but says she was interested in the oil and gas industry because she saw it as being at the forefront of technology in many ways.

“Step foot into a refinery or onto a rig; it’s an engineering marvel.”

Hired by an oil major after graduation, Liu says, “I loved the culture. It was all about safety, efficiency, doing things well and morally. Everyone was working as a team. They challenged you, but they also mentored you. I cherish the experience. They didn’t care if you were a guy or a girl or what your background was. I’m an Asian girl, but I could have been a purple dinosaur and I felt like it wouldn’t have mattered!” she says laughing.

Liu believes it was that atmosphere of acceptance and encouragement that gave her the confidence to step out on her own in 2015. “I’m really grateful to the company. If I hadn’t gotten that kind of support, I don’t know that I would have dared to try something like this. We were judged on the merit of the project and not who was doing it.”