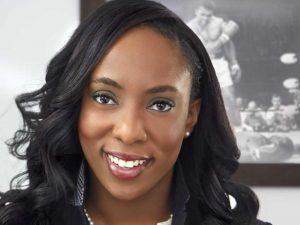 “I always wanted to be the love-child of Beyoncé and Bill Nye the Science Guy,” Jessica O. Matthews says with a laugh. “That’s the perfect embodiment of hard work, looking good, but also the science – the belief and interest. Bill Nye the Science Guy made magic real, and the more accessible [science] is, the greater chance we have at living in a better world. We need to empower more people to engage with topics that seem out of reach.”

As a child, Matthews always enjoyed “tinkering” and inventing things. The first commercial invention by the Harvard-educated CEO of Uncharted Power, who has a both a bachelor’s in psychology and economics and an MBA from the school, was a soccer ball she, along with three college classmates, created for an engineering class. After 30 minutes of play, the ball generates enough energy to power a small, attachable LED light for three hours.

Born in New York, Matthews, 32, is a dual national, holding both American and Nigerian citizenship. She was motivated to create SOCCKET after attending an aunt’s wedding in Nigeria, which was disrupted by a power outage, and seeing how people – including two cousins, who are engineers – simply accept such things as a fact of life. (Matthews says, “And that’s a global issue.”)

Read the whole article on Forbes.com