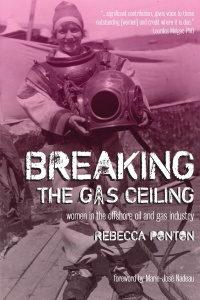 Breaking the Gas Ceiling: Women in the Offshore Oil and Gas Industry

In Breaking the GAS Ceiling Rebecca talks to a number of women, some of whom were among the first to explore this relatively new frontier in the 1970s and ’80s when the offshore sector began opening up to women, and who paved the way for a new generation of female oil and gas workers, as well as some of the inspiring young women who are helping bring about the change they want to see in the offshore world. Chapter by chapter Rebecca reveals the real-life account of one amazing woman after another, each chapter being a transcript of an interview with some of the most remarkably talented and resilient women in our industry.

Women’s roles are changing in both society and the workplace, with male fiefdoms being cracked open with educated and ambitious women now playing an increasingly active part across a range of professions. Despite this, Rebecca recognized that the energy sector, especially the oil and gas industry, had lagged behind other industries. Traditionally, this was considered to be a male domain but increasingly women are choosing to accept the challenge and are now playing an active part in key activities such as exploring and producing hydrocarbons for an energy-hungry world.

Throughout the chapters in this book you can see how change is slowly but surely being driven by women themselves and the choices they make. The way women perceive themselves and their role at work has changed irrevocably as they opt for education pathways in science, technology and management. However, as they embark on their careers they still face resistance at every stage. The women interviewed for this book all show a common thread of resilience born of hardship, determination and indifference to other people’s perceived perceptions of an industry that hasn’t traditionally been women-friendly. It still isn’t in some respects. But it is changing.

Amanda Barlow is the author of An Inconvenient Life: My Unconventional Career As A Wellsite Geologist, she has written this review on behalf of Midwest Book Review